Not all the Garden Design drawings I get asked to do are for large or complicated projects.

I produce a lot of 3D visuals for schemes where a little design input is required but the main emphasis is on producing an accurate "artist's impression" that can be easily interpreted/understood by all involved (customer/contractors/neighbours etc.) and quantified for pricing purposes.

The majority of the following images have been produced for Ashwood Services during 2014.

Some of the projects have been built on site whilst others are in the pipeline.

For many examples of gardens I have designed for larger (mainly executive) properties keep scrolling down the blog and click on the "older" button when at the bottom of the page. 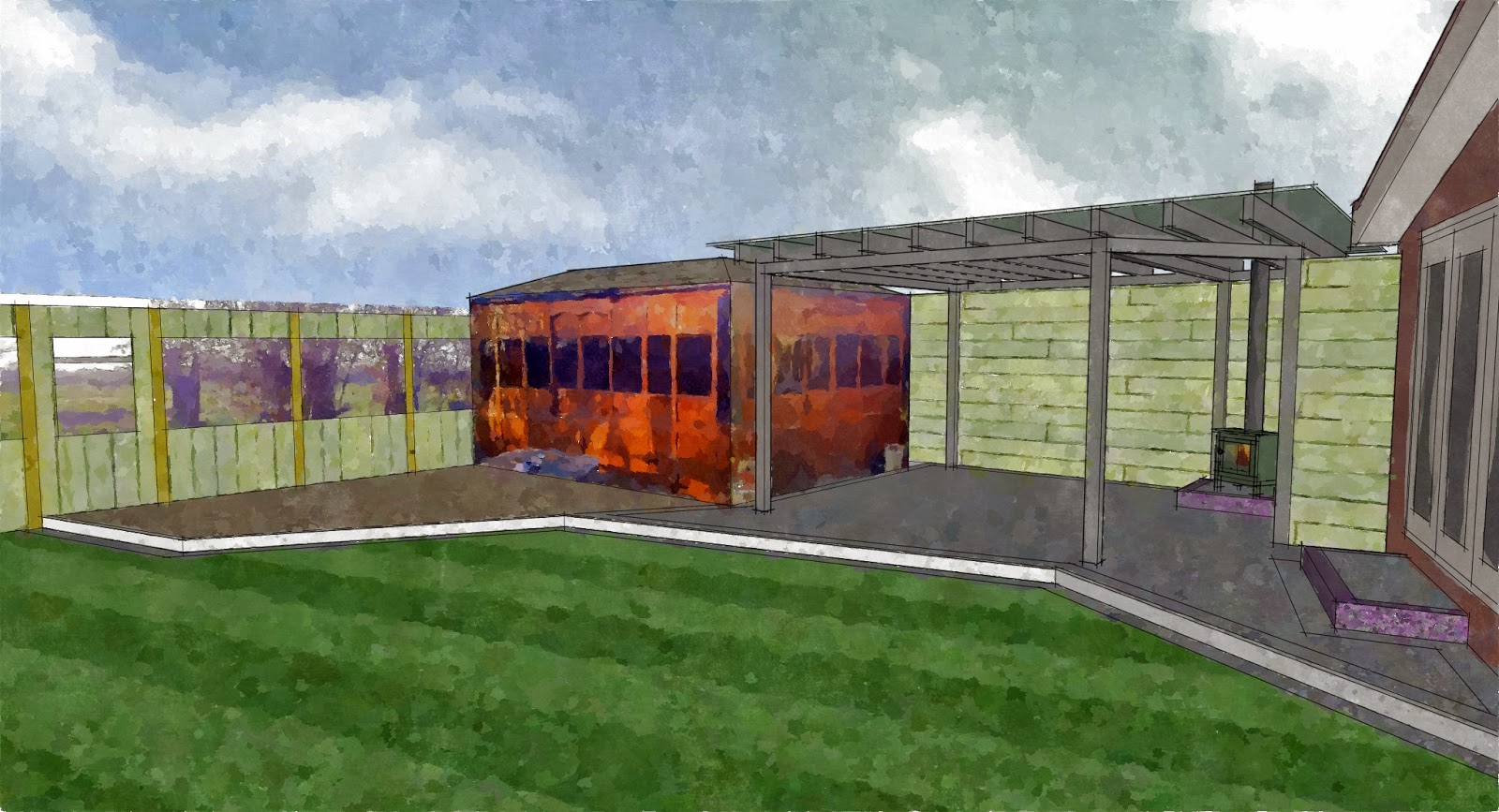 This is a simple design I produced for a friend of mine. He has had a new extension built on the back of his property, he has an existing hardwood summer-house and his property backs on to the fields of Anlaby Common. He plans to purchase a wood-burning stove for outside use and wanted me to show this on a new patio with an overhead covered timber/poly-carbonate sheet pergola. I also suggested that he constructed a new rear timber boundary fence with "windows" cut out to retain the attractive views over the fields. 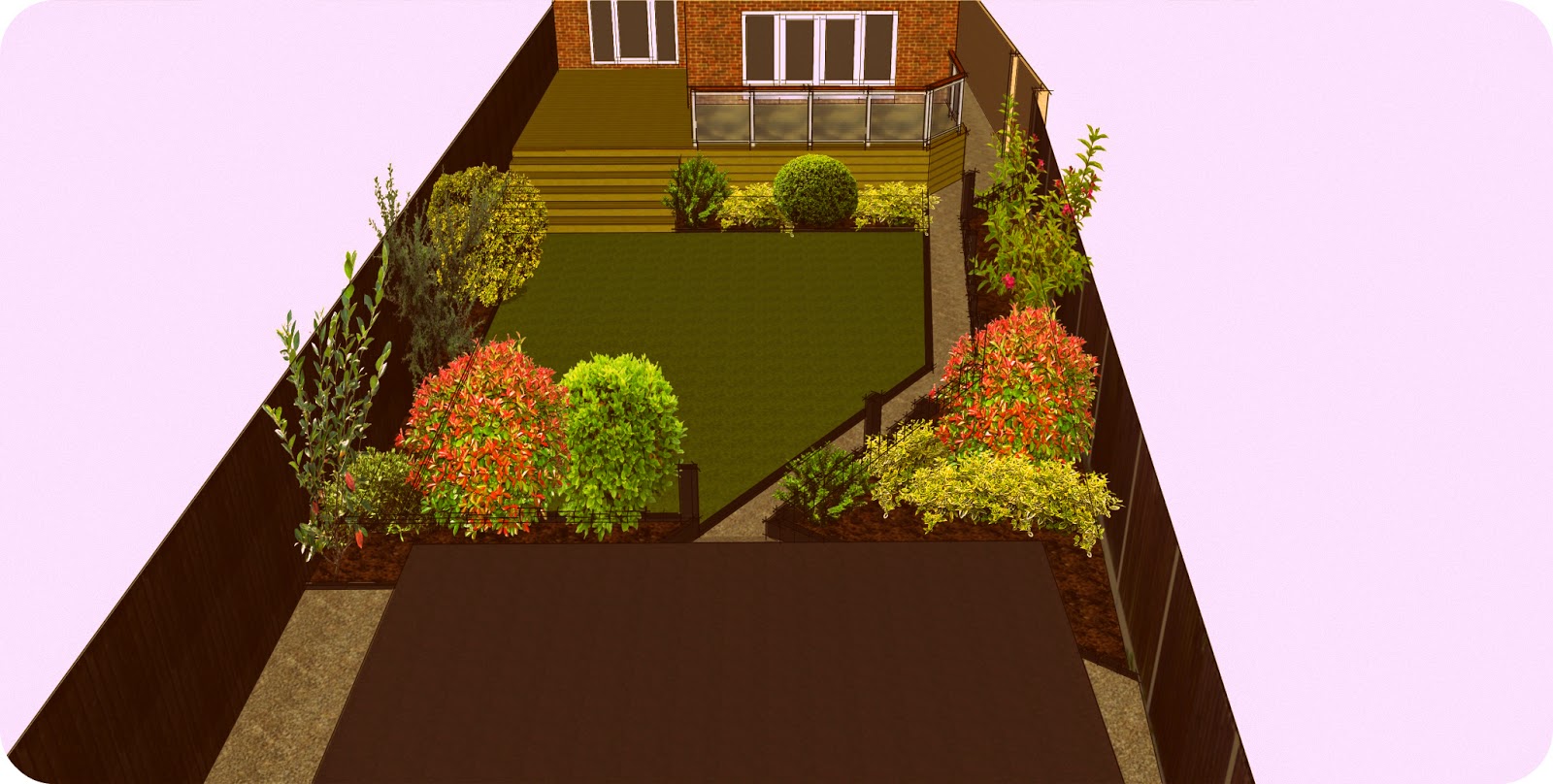 The rectangular object in the foreground of this image is a garden office/"man-cave". It was delivered and erected in 2013 and the customer wanted a new footpath to link up to one at the side of the property to provide all-year-round access. An existing timber deck adjacent the house was also to be replaced with a new, larger deck (with a glazed balustrade). 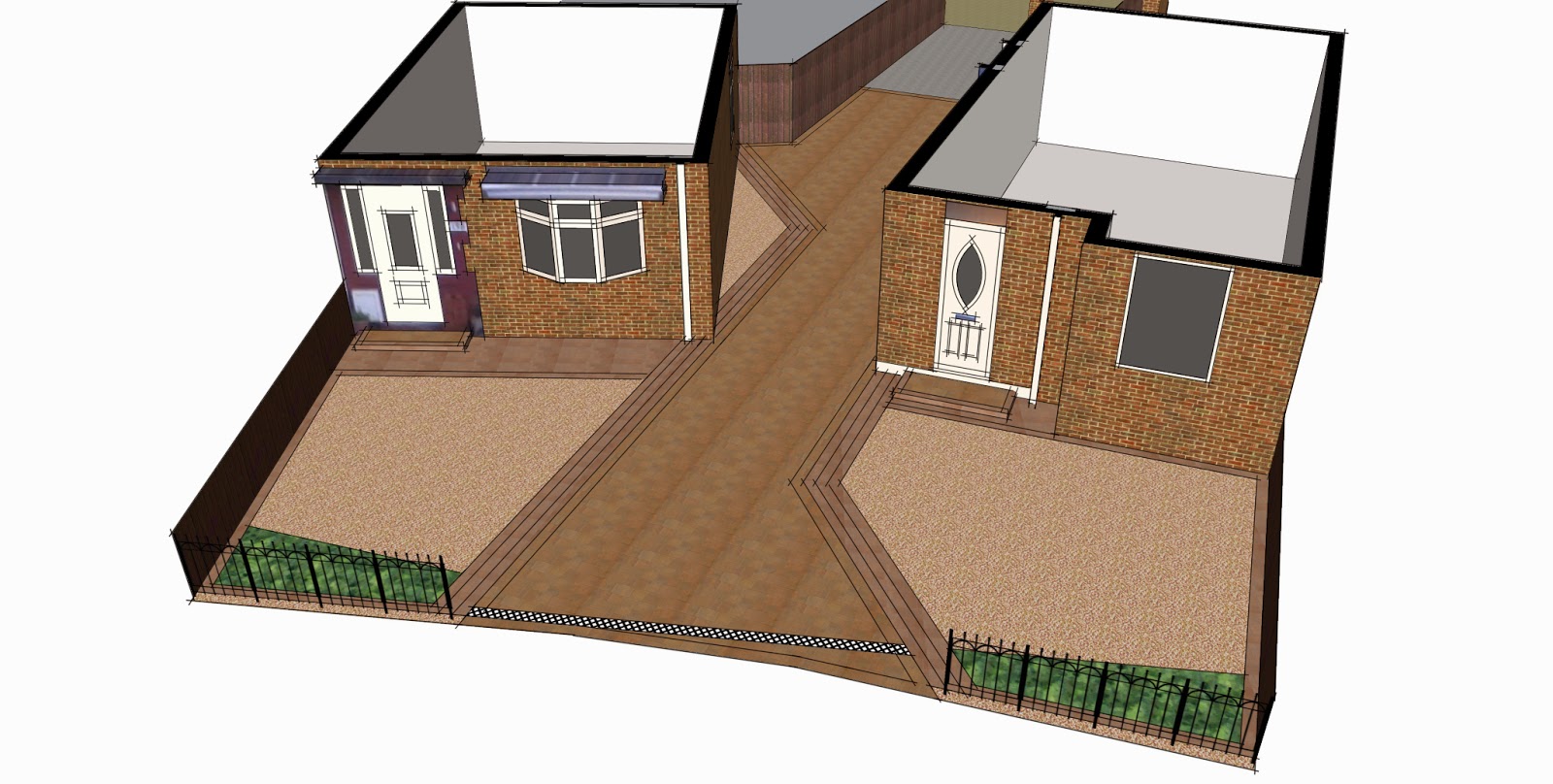 The above image is for a project where an existing shared-drive consisting of cracked concrete slabs was to be replaced with a block-paved driveway with informal gravel parking to the sides. 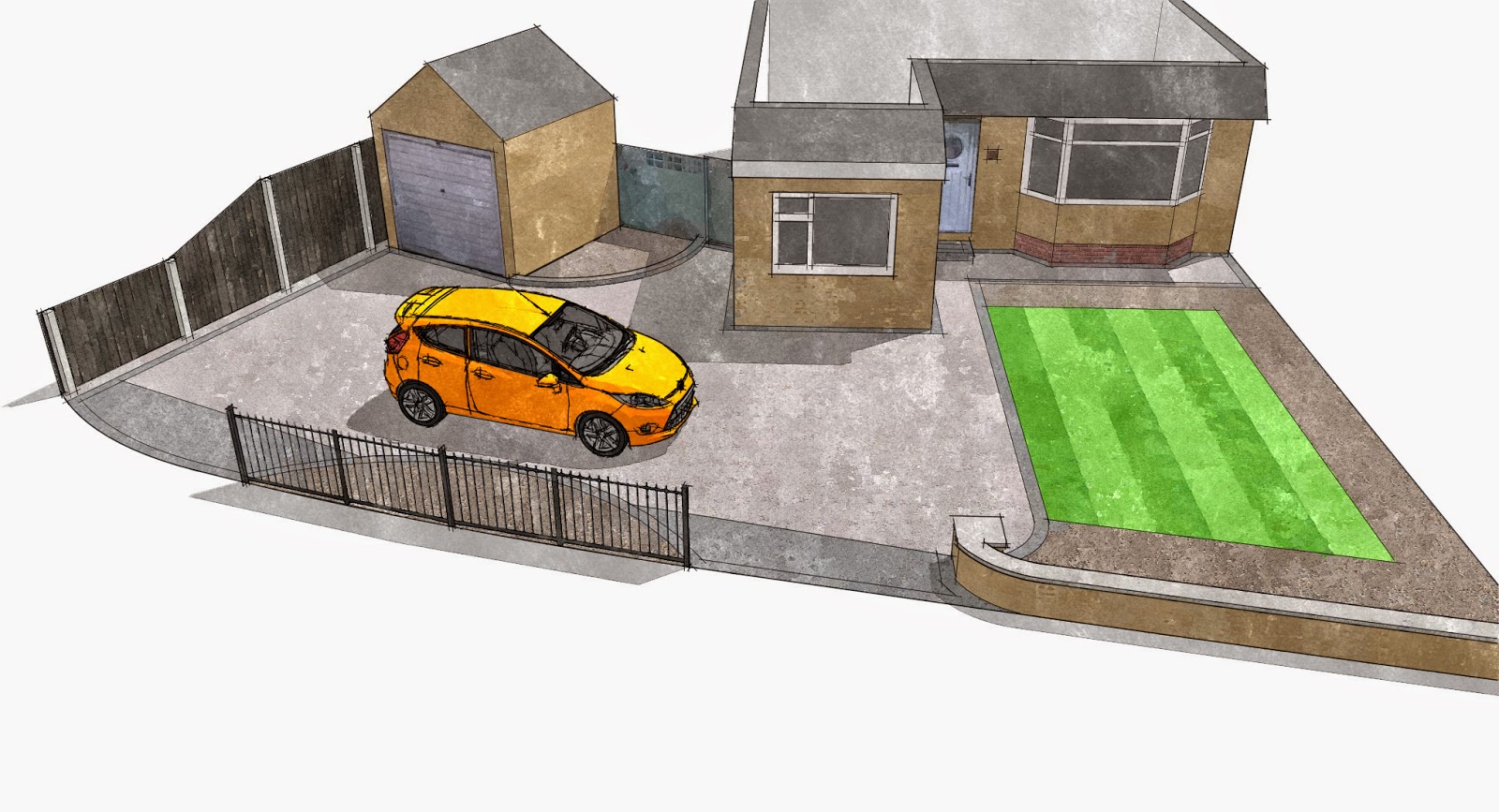 This was another driveway project where concrete slabs were to be replaced with block paving. The drive previously only had one entrance/exit so the plan was to create a "horse-shoe" shaped area with a second opening. 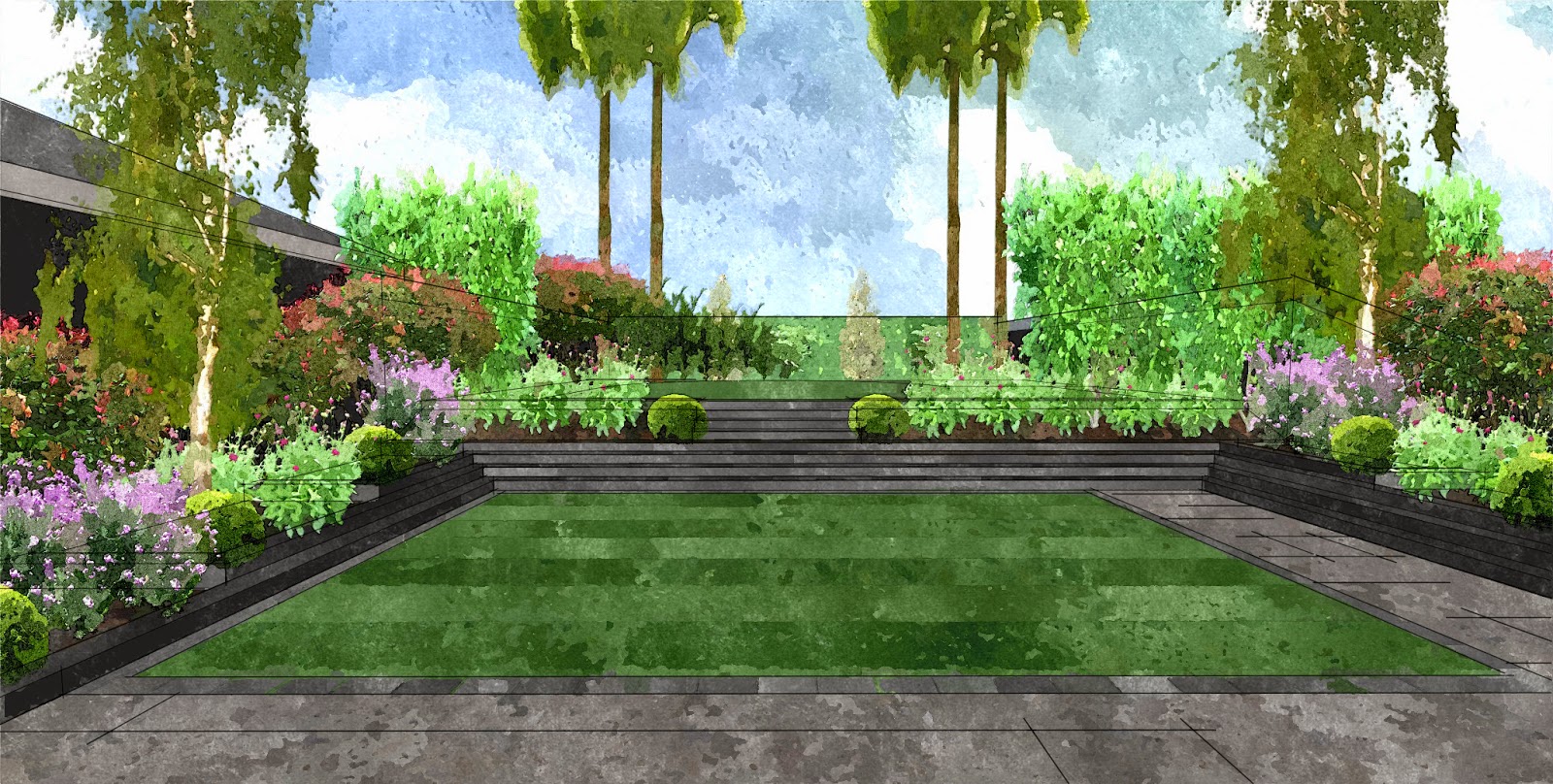 The raised planting beds and lower flight of steps in this project were existing, as was the upper/lower lawn areas. The plan was to re-instate the existing sleepers and install another flight of steps up a steep bank (mid-way up the garden) and stain them all black. The upper and lower lawns were to be re-turfed, the beds extensively planted up and a contemporary granite patio terrace created adjacent to the property.
Posted by David Beasley at 22:10