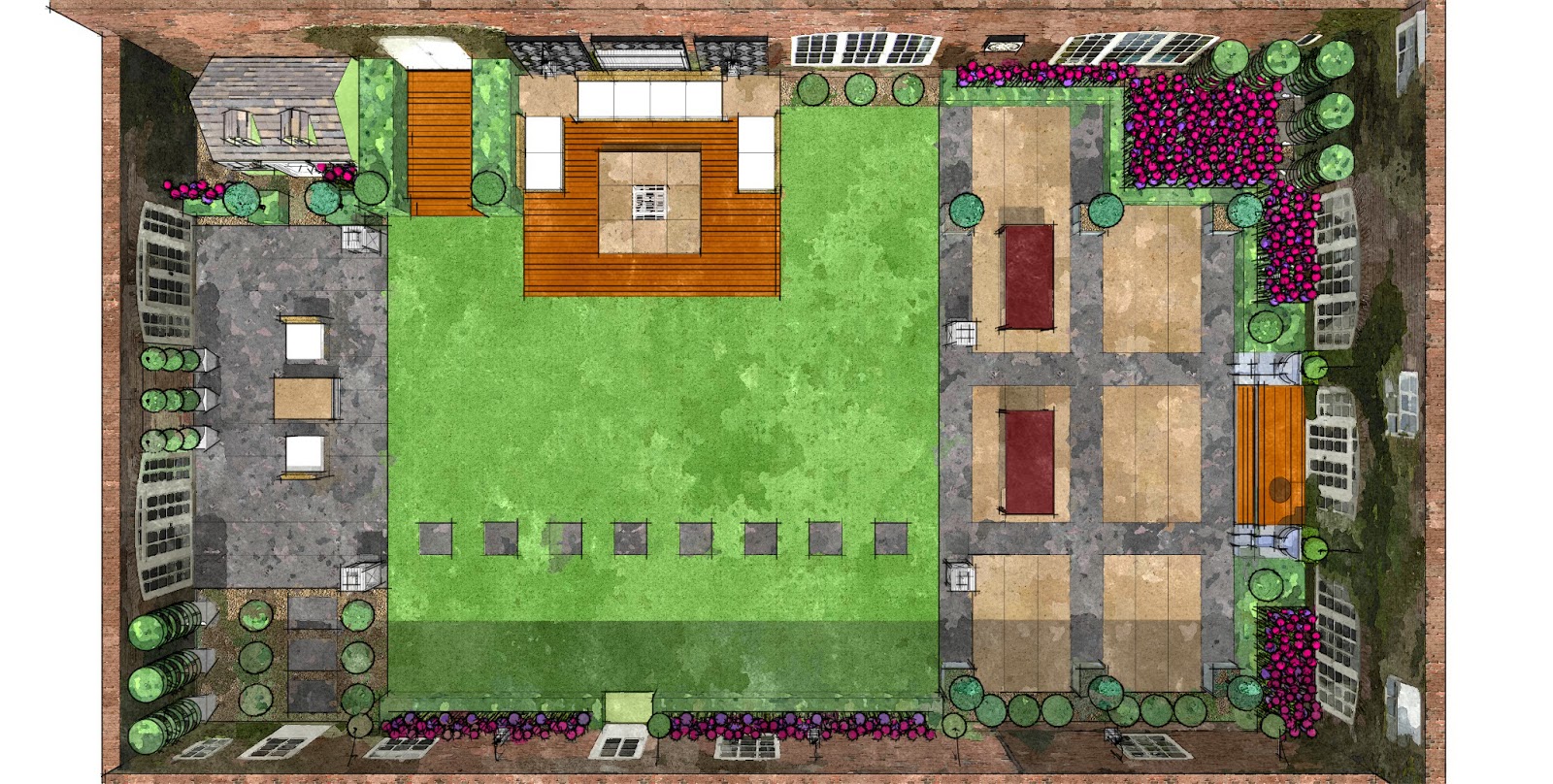 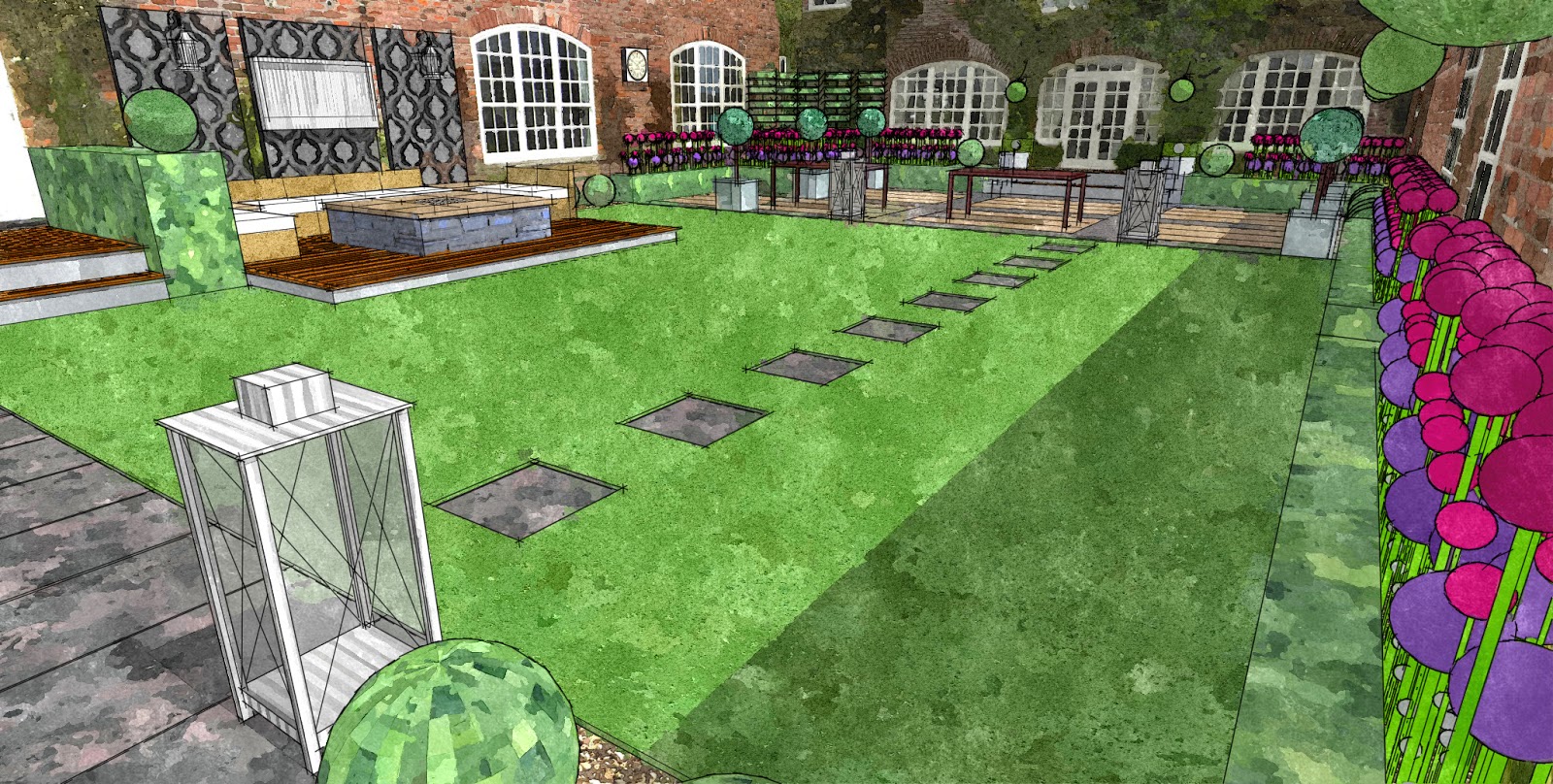 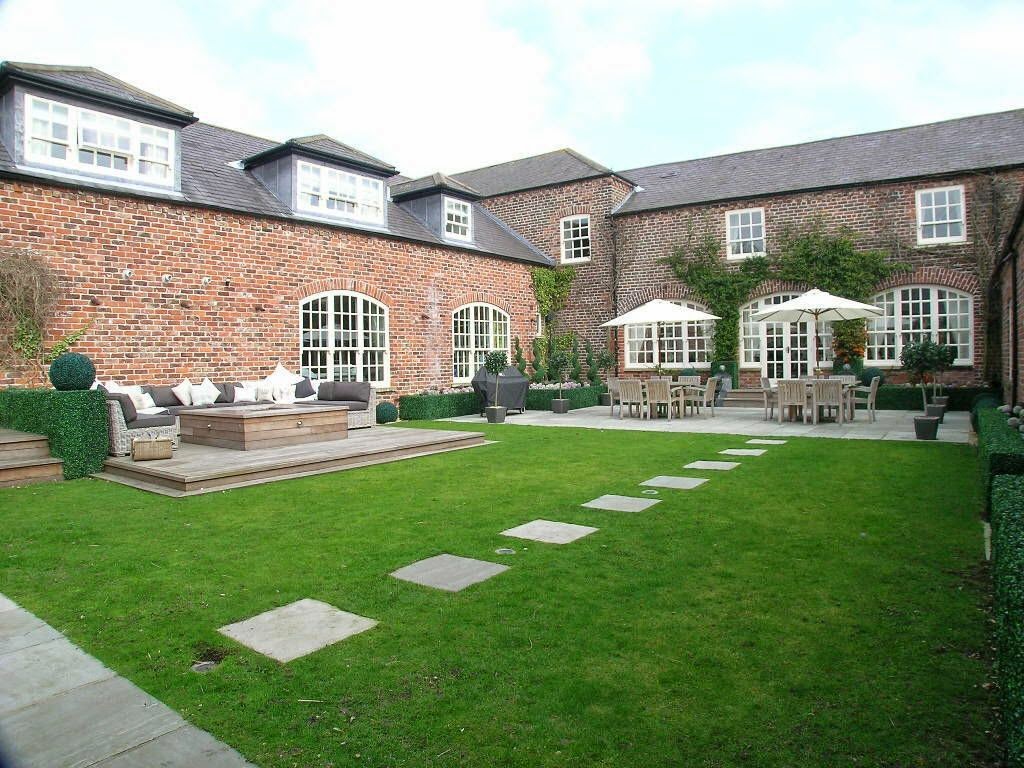 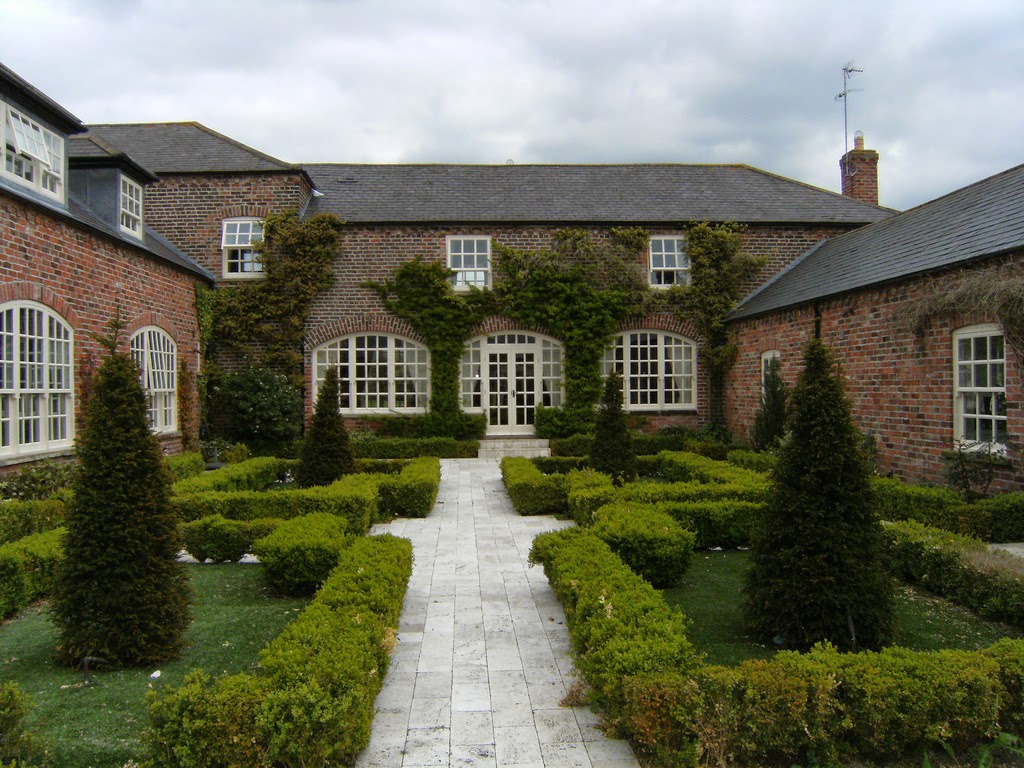 View towards lounge prior to garden construction. 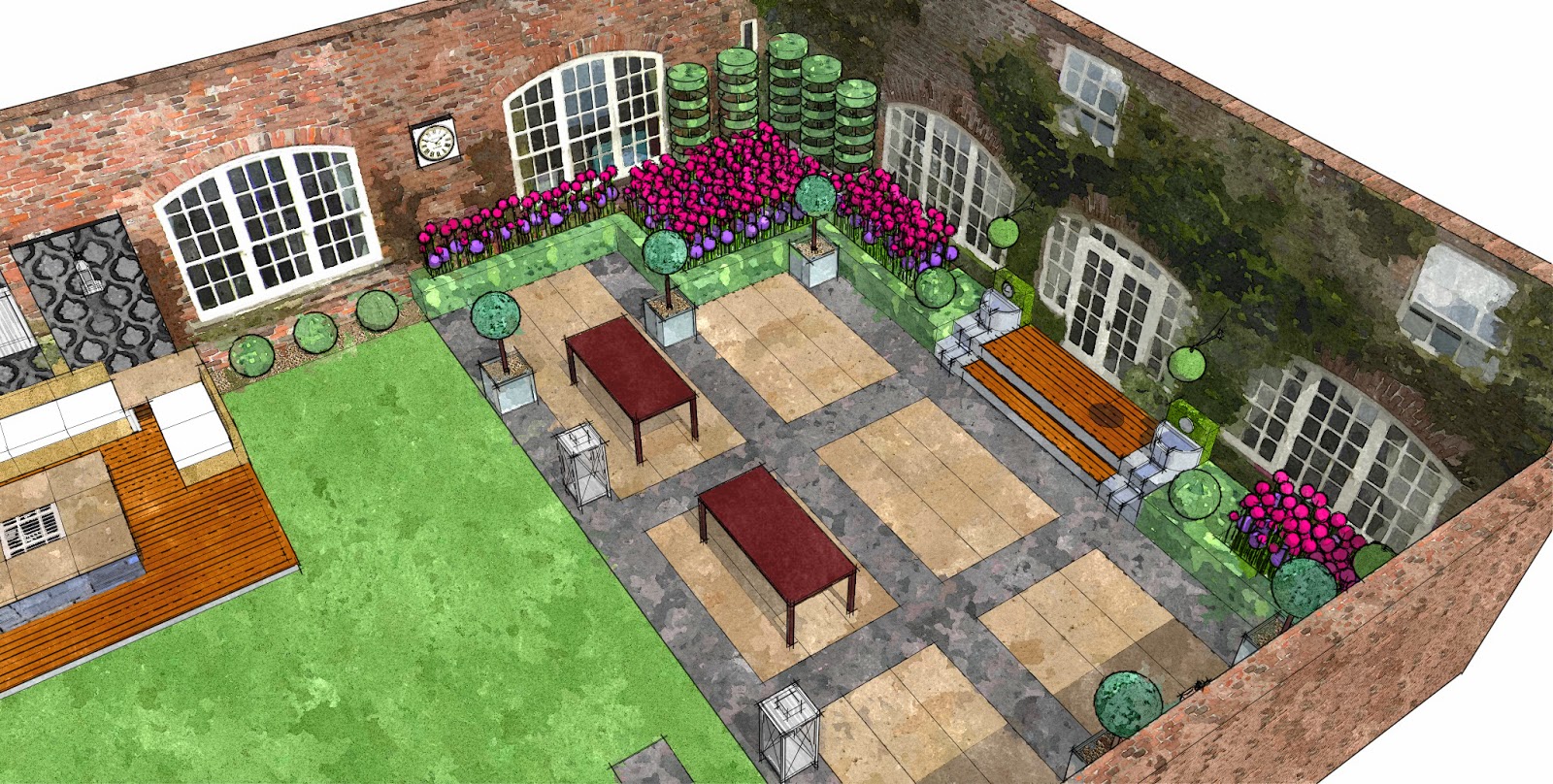 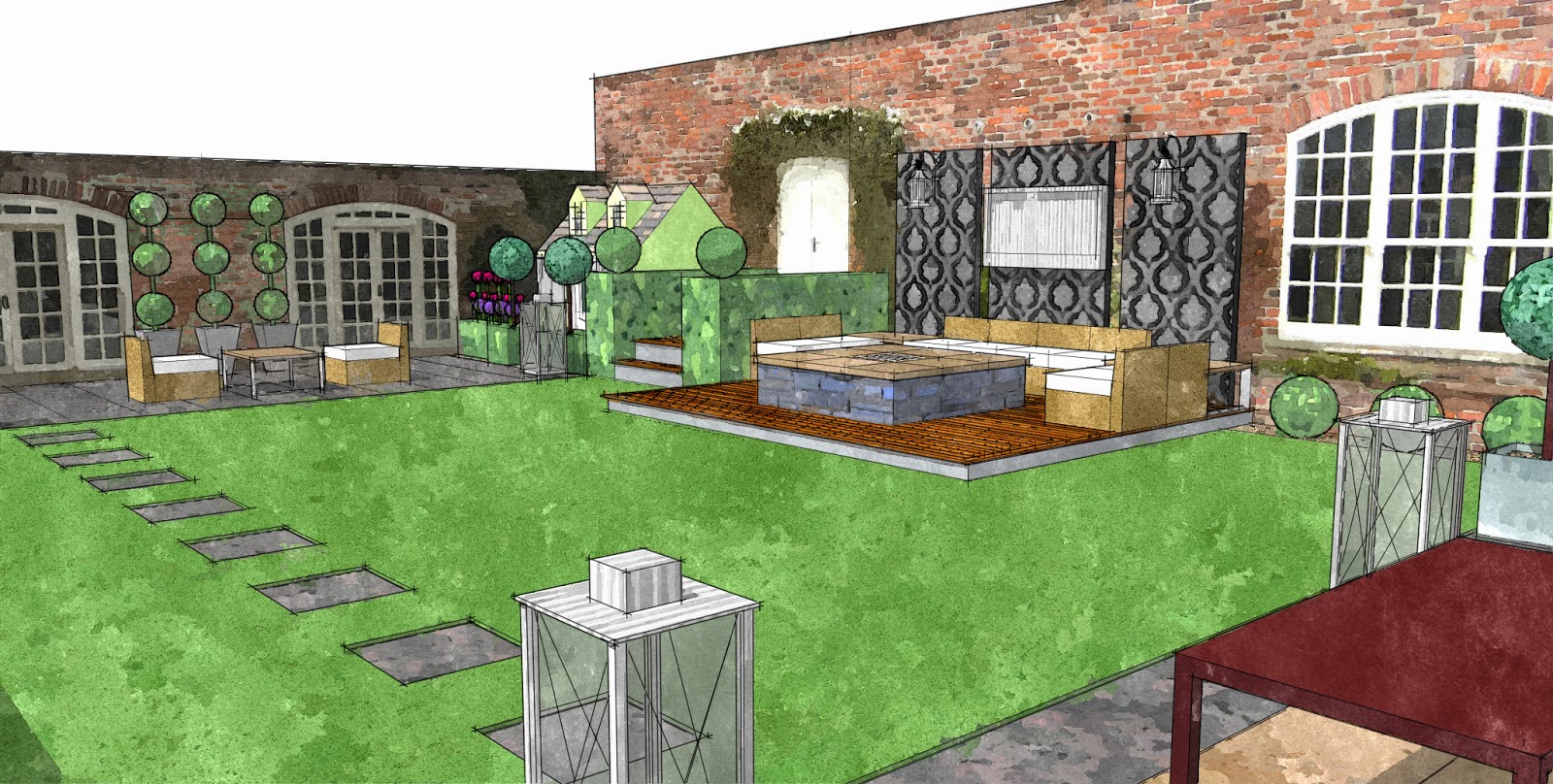 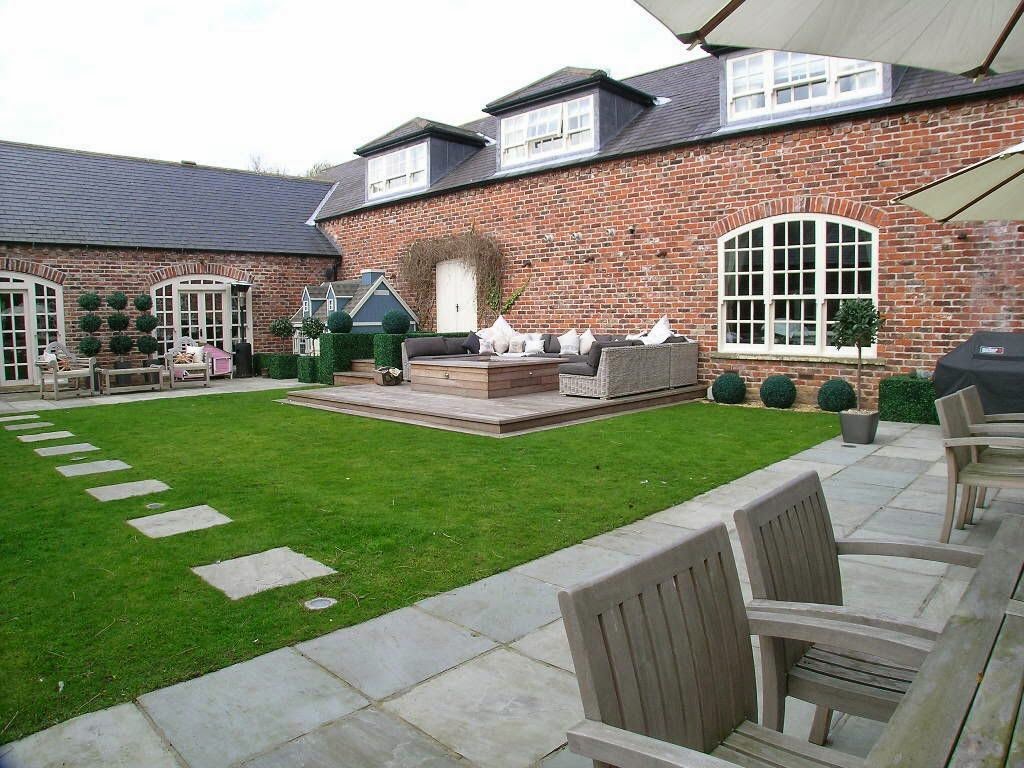 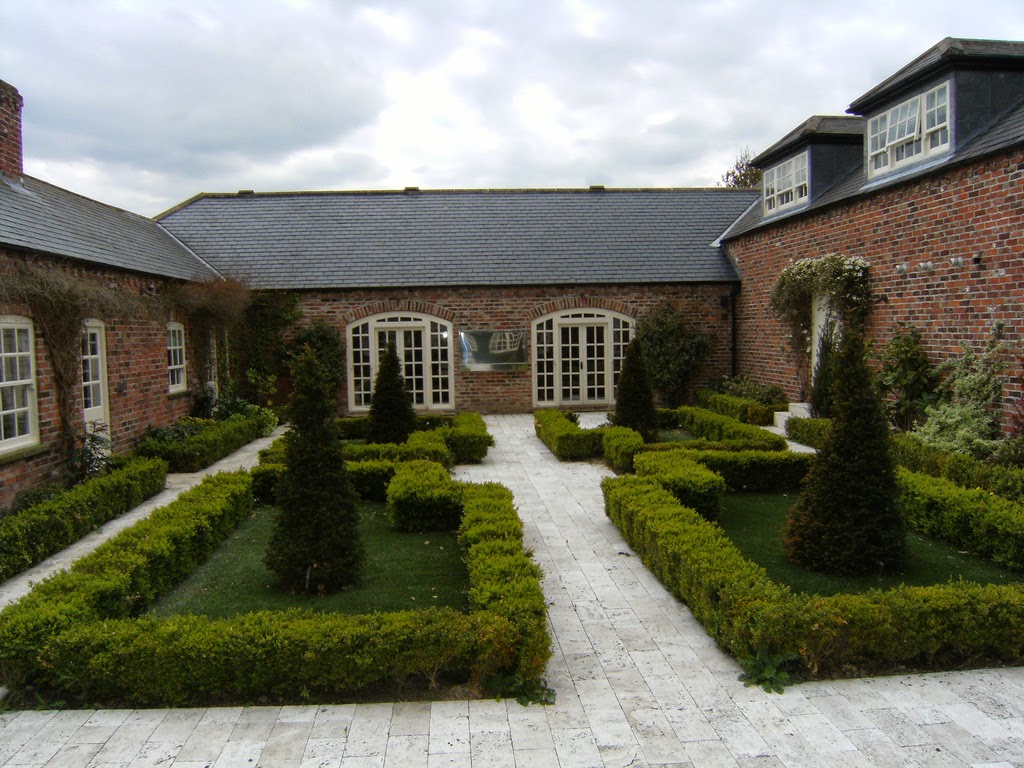 View towards pool room prior to garden construction. 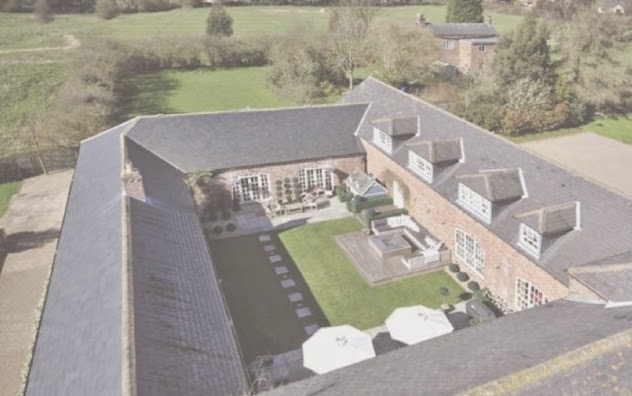 This large-sized country house courtyard garden in Walkington near Beverley, East Yorkshire was designed during the Summer of 2010.

Prior to commencing my design, the garden was mainly laid to travertine limestone paving with sections of artificial lawn edged by real buxus hedging that was suffering from "box blight".

The Design Brief was as follows: A busy professional couple wanted a very low-maintenance garden to entertain and relax in that was also "child-friendly".

The main design-feature was to be a series of large terraces of Indian Sandstone paving linked by "stepping stones" over a large artificial lawn (the Client owned a company specialising in artificial golf greens". The main terrace was to be for dining whilst one near the swimming pool room was to house a children's "Wendy House" and act as a breakfast terrace. A relaxing "outdoor lounge" area was to be housed on a high quality raised hardwood deck and was to feature comfy rattan seating and a raised fire-pit/table top. The properties lounge was to be accessed via. a flight of steps constructed from the same hardwood and featured a bespoke tiered water cascade at the edges which was to be constructed from lead sheet. The most unusual aspect of this design is that the Client requested that the proposed box-hedging, topiary and lawn be constructed from synthetic materials due to their previous experiences and for low maintenance purposes.

The property is down a rural lane on the outskirts of Walkington in East Yorkshire.

This design was completed and  handed over to the Clients and their builders in the summer of 2010. The landscape construction works took place later that summer and the photographs of the completed garden were taken during 2013. 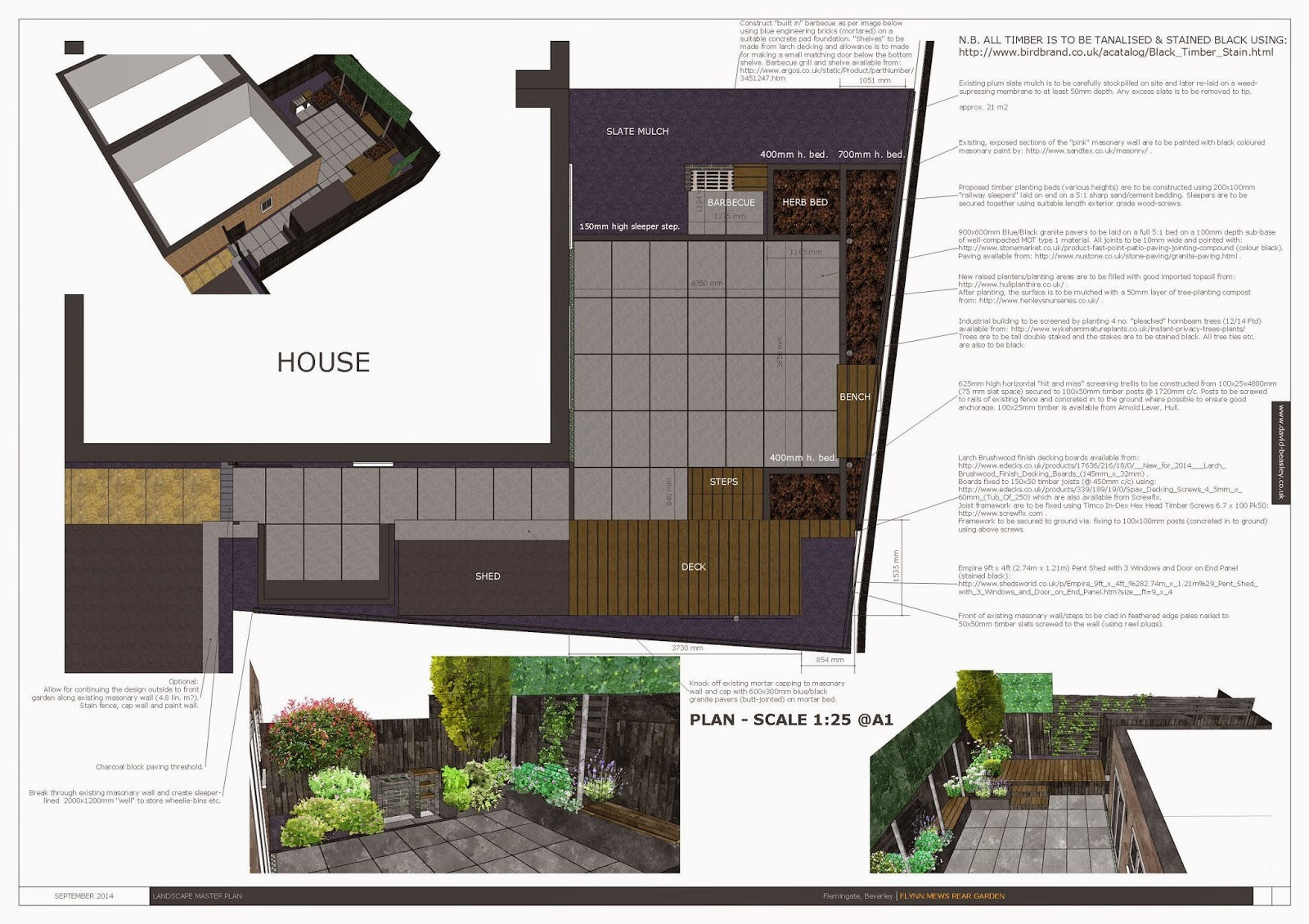 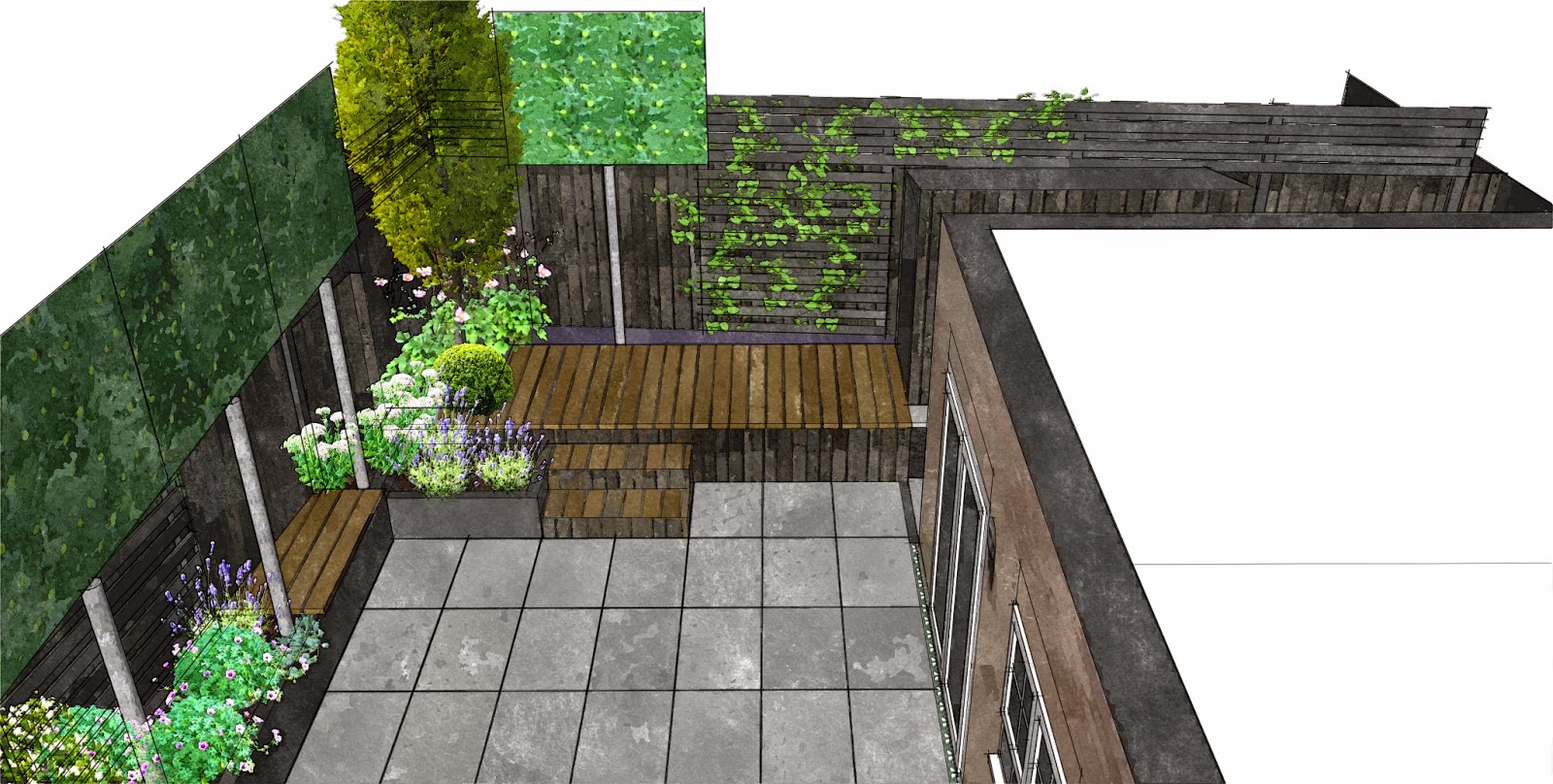 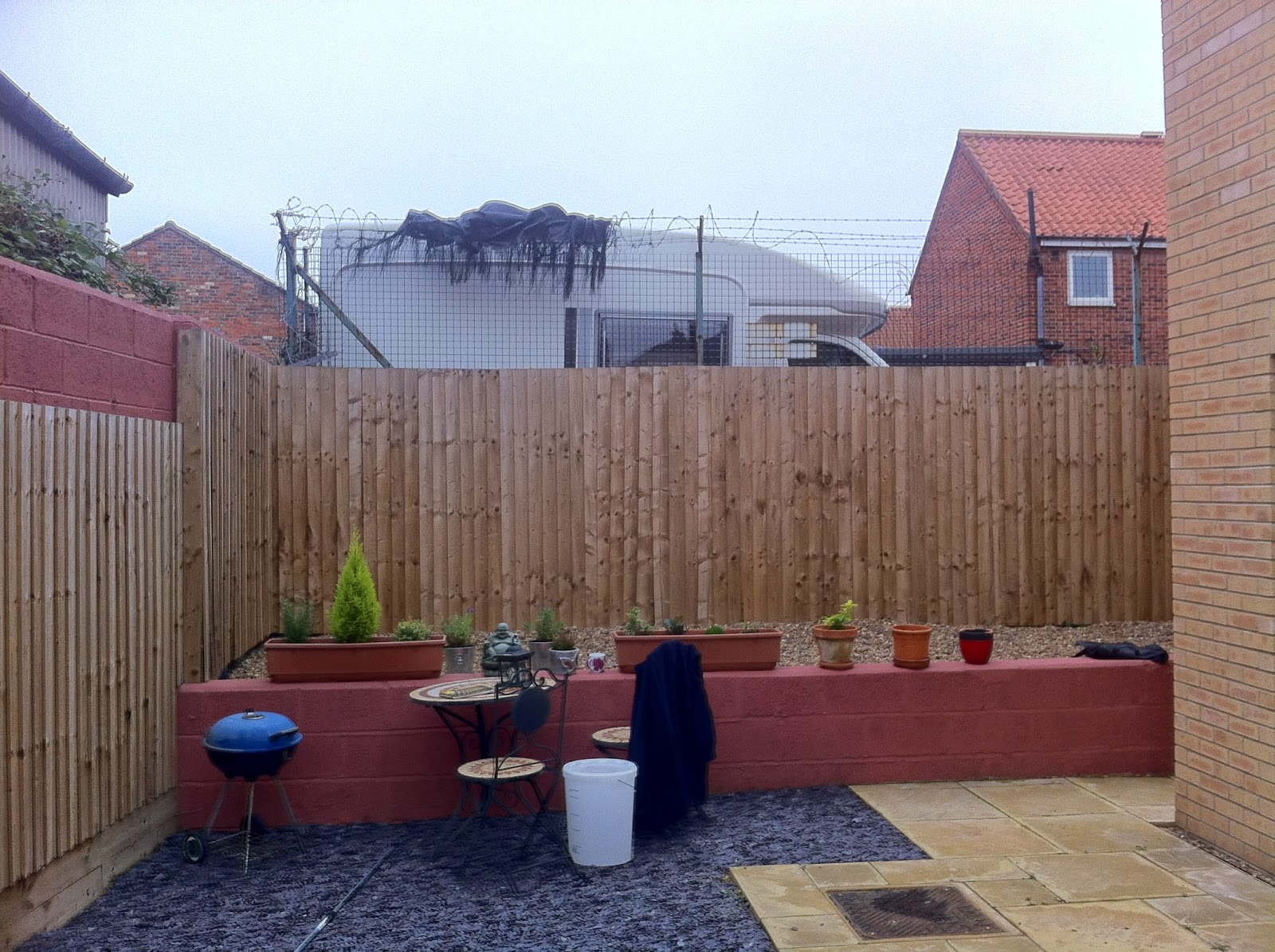 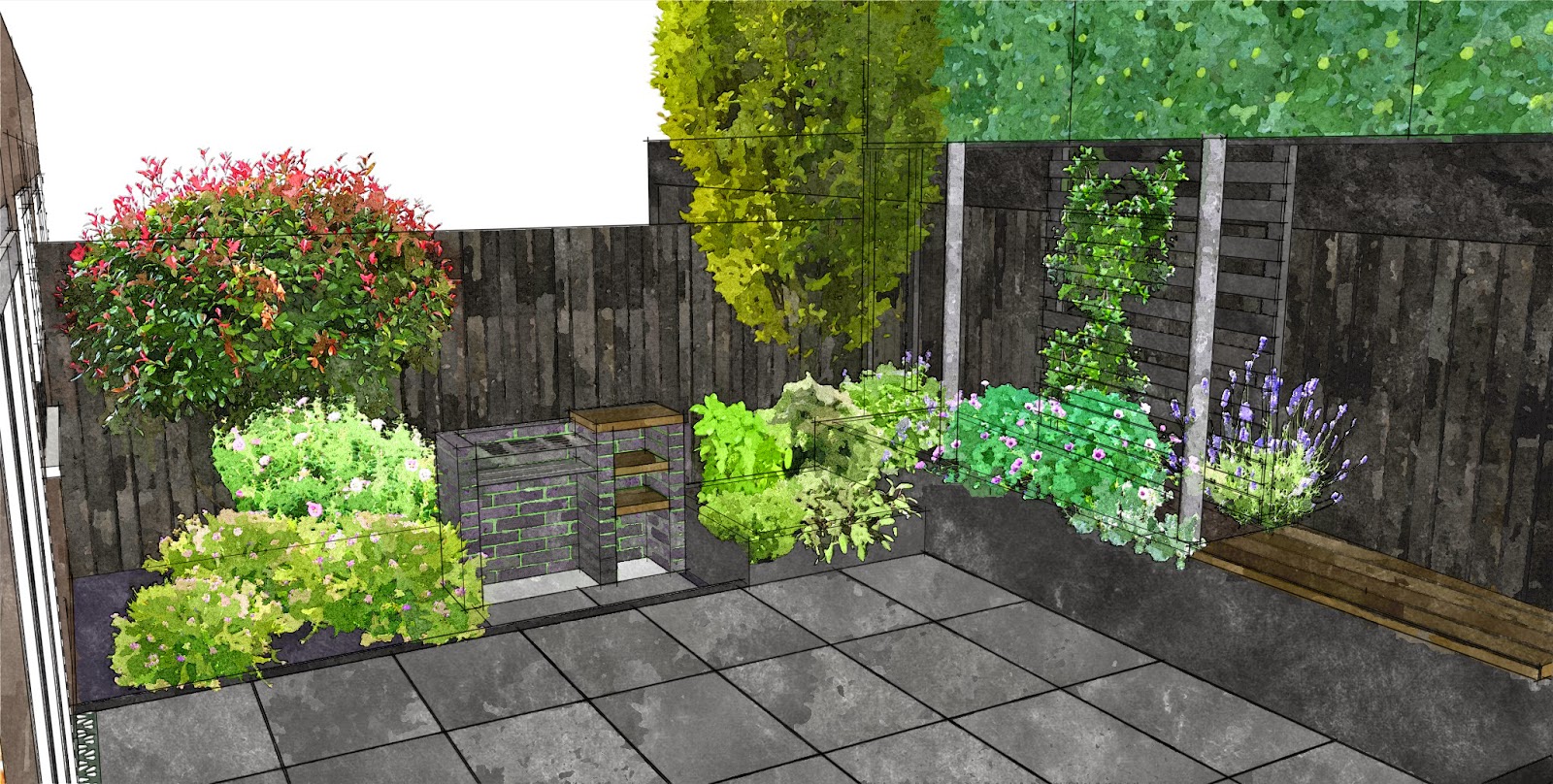 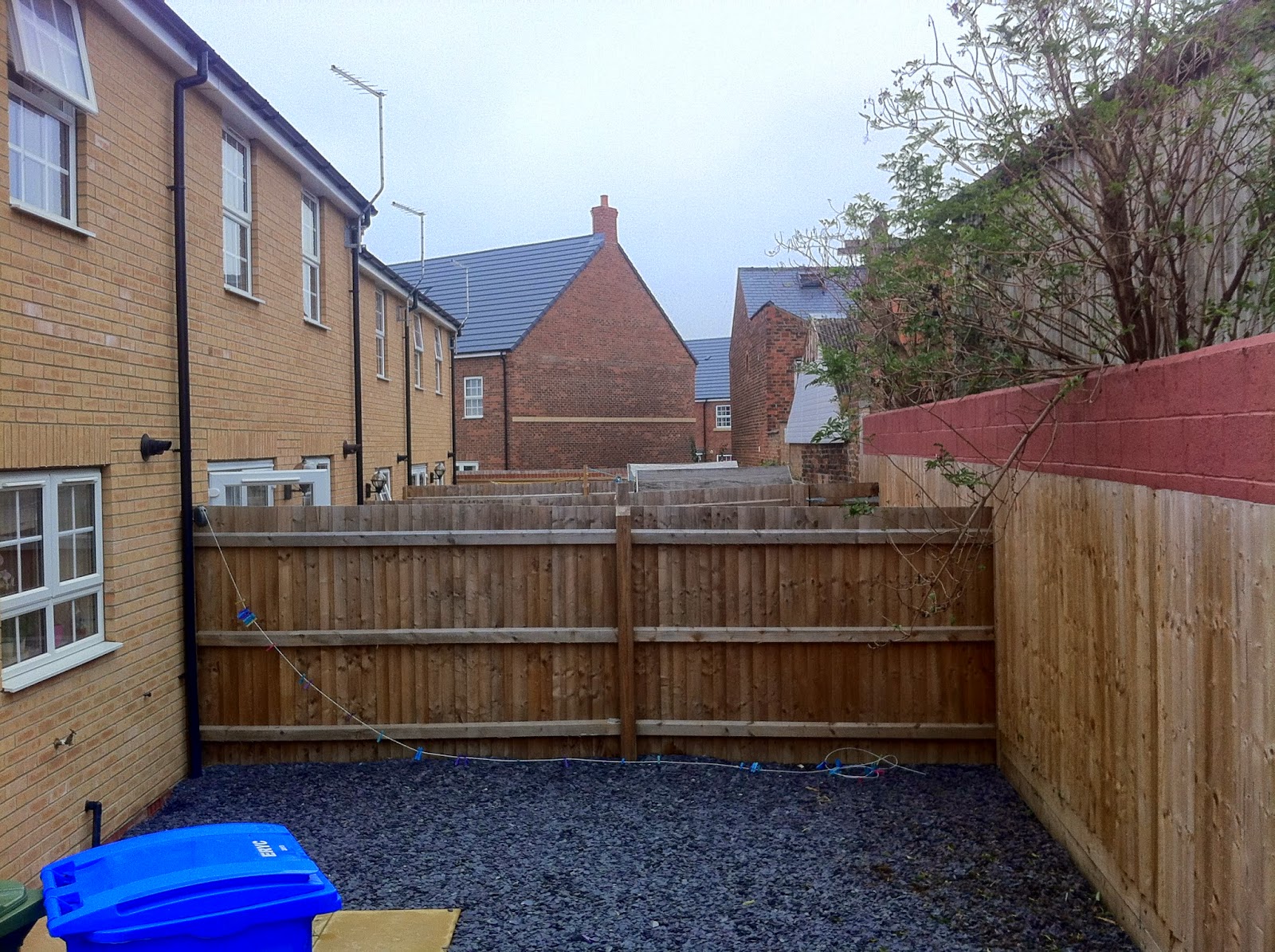 This small-sized courtyard garden in the new Flemingate Development in Beverley, East Yorkshire was designed during the Late Summer of 2014.

Upon my initial visit, the garden was mainly laid to plum slate mulch with a small paved patio and a pink painted raised planter along the side of the house. The site boundaries were constructed of treated "feather-edge" board fencing with steel mesh industrial fencing behind.

The Design Brief was as follows: A busy young professional couple wanted a garden to "chill out" in and cook.

The main design challenge in the garden was the screening-off the views of a large industrial building to the rear and a parked up recreational vehicle on land to the side of the garden. This was to be achieved by erecting slatted privacy trellis on top of the existing fence, planting "pleached" Hornbeam screening trees in new raised timber planters and by planting vigorous climbing plants such as "mile-a-minute" that will quickly soften the trellis and erase the un-wanted view.

All timber and masonary walls were to be painted black to take attention from the industrial buildings, improve the "gaudy" colour-scheme and provide a fantastic back-drop for future planting.

At ground-level, a large blue/black granite patio is to be constructed which is large enough to accommodate a four-seater rattan "cube" dining set.

The Client is a keen cook and so a permanent engineering brick barbecue is to be constructed in the garden with adjacent raised herb-beds constructed from new "railway sleeper" style chunky timber.

The existing raised planter is to be made more useful by firstly creating an elevated seating deck made from Siberian Larch  which leads to an 4' x 9' pent roofed storage shed. Behind this, a section of retaining wall is to be removed to create a "well" for storing wheelie bins.

This design has just recently been completed and has been handed over to the Clients and it is envisioned that implementation of the garden design landscaping will be "phased" starting on-site sometime in 2014.